Vasile Parfenie
Vasile comes from Italy through Uniser. He is doing his work practice at Verus which is a successful marketing agency in Maribor. In his work practice, he does market research and he tries to improve our tourist products. Also, he translates some documents from Italian to English, and sometimes from Slovenian too. Verus does many events so there is always a lot of preparation to do and invitations to send. He even went to three of them and one was in Ljubljana. He really enjoys working at Verus, and he says that his coworkers are really friendly towards him and he feels like he is doing it great. He wish he could work for a company like this when he finishes school.
Aniol Vilaregut Argerich
Aniol comes from Spain through the TLN project of Asociación Mundus. According to his studies of mechanical engineering, his internship is in the international company Palfinger, where he draws and designs new structures, and also helps to grow up the company. He is so excited to see his own designs built. He is hooked on skiing and bikes, also he enjoys going to Pohorje, where  you could come across with him someday.
Martí Cera Rull
Martí comes from Granollers (Barcelona) and his work practice is in Mladinski dom Maribor. He is working in the unit of Slivnica where they perform projects of education based on Social and Therapeutic Horticulture. His tasks are based on teaching how important is the nature, how to take care of it and how to take profit from it in a good way. He is so excited with one of his workshops called “Get to know vegetables and their seeds” which youths perform in the Center.

When I arrived in Maribor, I was so confused. I liked the city and also, I wanted to live this incredible experience, even though the organisation told me the place of my internship was so far away from where my apartment was.  The first days of our mobility, we did so many cultural activities around Maribor and some preparations with our group. However, I was so nervous when we had the interview with our companies due to, I felt that I wasn’t prepared for that. I didn’t know what to expect.

Finally, the interview was amazing, they were so kind and nice to me. They said I could decide what kind of experience I would want, I mean, in which field I would like to improve or develop. I’m so glad that Association Mundus and ZNI have given to me this opportunity, although I have to spend 3 hours of bus every day between go and back from Maribor to my job, it’s worth because I really enjoy going to my internship. 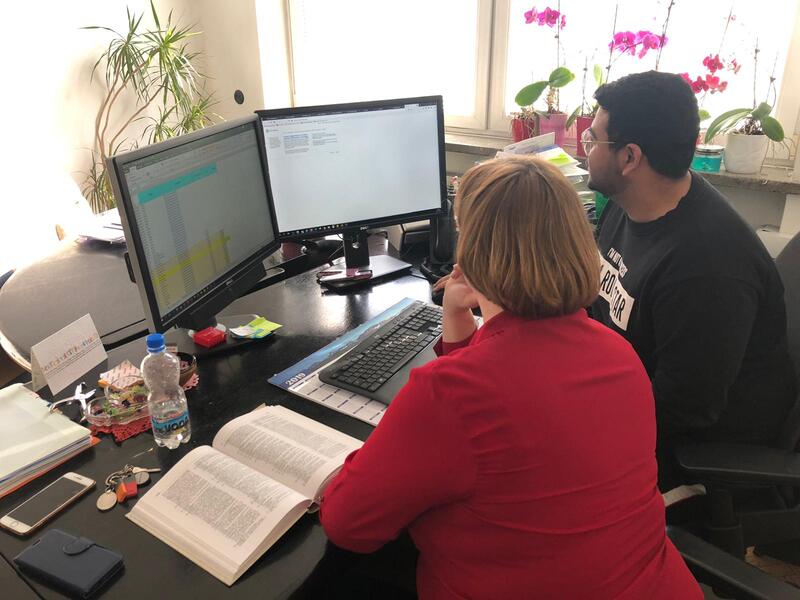 ​Hugo have a nice week in his company Kreativni Institut. He was setted up with some tasks and most of them he completed and he is currently working in other ones. He wants to improve his abilities for being a nice DJ.

Leandro have a nice week, and now is more confident in his skills than last week. He believe that his abilities will improve even more. He went with his mentor to had lunch, he visited the castle of Ptuj, and saw some paintings from the past century in the castle museum. He went to Pohorje, and it was so nice to meet people of other countries that are doing an Erasmus project.

Bogdan has a complicated start, he found very difficult to stay in front of the computer for 8 hours without being able to go somewhere, his work practice are in Rdeca oranza d.o.o. He is doing something that he never learned, but he is curious and he knows how doing it. He really liked that all the people of Slovenia are nice and almost all know how to speak English, which is impressive.

Nuno comes from Portugal and his work practice are in Sola Prihodnosti Maribor. He is working at Web Development. He has to installed Laravel, read its documentation, practiced using the development environment and am feeling more comfortable using it. He began his Slovenian course on Tuesday.
On Saturday, he went to a trip to Pohorje and he met a couple of people that we got along.
Lucie Chalupova
​Lucie comes from Czech and her work practice takes time from 27.9. 2018 to 27.4.2019. She is working at elderly home Dom Danice Vogrinec - or as she would say it, this is not really working as she loves her job it as much as it was her free time. She is helping elderly with breakfast and lunch and also carries out social activities. This week was special because of St. Martin day, as there were even music bands visiting the Elderly home and performing in the afternoon. Lucie says she really enjoyed it. Her biggest challenge is understanding Slovenian as she would like to communicate more with users of the Home. She is attending a Slovenian language course and therefore we all believe that by the end of the mobility Lucie's Slovenian knowledge will improve significantly.